Today's headlines suggest Democrats are moving beyond their destruction of the coal industry to attacks on "big oil." Charges intimate major oil companies such as Exxon/Mobil long knew of emissions and greenhouse gasses and their contribution to so-called man made "global warming." According to recent news releases, the attack will be similar to the government's attack on "big tobacco" a few years ago.

Obama's environmental policies devastated the coal industry. Miners in West Virginia and other coal producing states find themselves out of a job. One report states the president's policies cost America more than 128,000 jobs. Ken Ward, writing in The Nation, said environmental issues surrounding coal only cost 1,300 jobs in West Virginia. I suspect, however, Ward's numbers reflect only those jobs lost for those directly employed in mining. Always ready to paint the best picture possible, environmentalists point to cleaner streams and air. Advocates for the coal industry tell us technical advances in mining and burning already account for cleaner air and water nationwide.

Who do you believe? As my father-in-law used o say, "Figures never lie, but liars sure an figure!"

If the president gets his way, the impact of attacks on "big oil" will be far worse than the "war on coal." The nation's economy runs on oil. Oil is used to manufacture a multitude of products. From one 42 gallon barrel of oil, refiners make 19.4 gallons of gasoline. The refining process for gasoline requires less than 21 gallons of crude oil. The rest is used to manufacture other products. Here are a few of the more than 6,000 items made from oil. 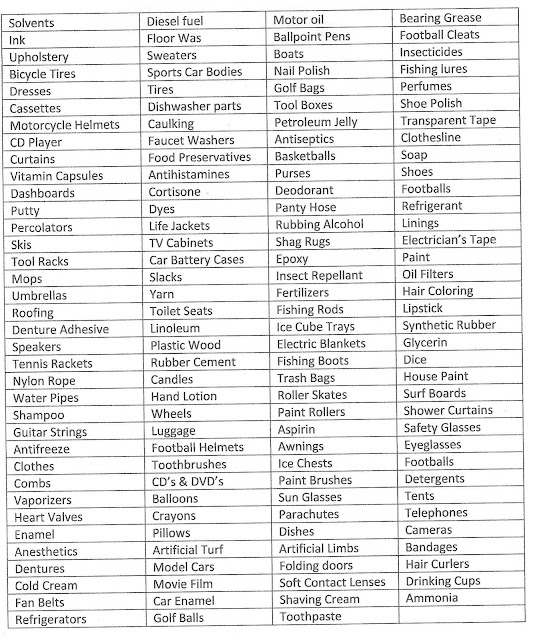 Consider the following. If the administration goes after the oil industry in the same way it has other fossil fuel industries, how will it affect the cost of these items? In the drive to transform the nation from a consumer of fossil to renewable sources, the impact on the nation's economy will be drastic.

The only alternative is to return to a nineteenth century lifestyle or pull the national culture to a level much like that in the undeveloped world. Keep your investment in Kentucky horse farms; we may need horseflesh!

Hasn't that been the Obama goal from the "get go"? He wanted to make the United States like the rest of the world. Much of this comes from a Marxist mindset and a determination on Obama's part to eliminate American egotism as an exceptional nation. The underlying excuse has been to counter climate change. It used to be global warming, but now it is climate change.

It is no longer global warming primarily because recent statistics work against any concept of man-made climate impact. Had the dire warnings Al Gore issued in 2000 come true, the Atlantic would now be lapping on the White House lawn, the polar ice cap would be gone, and we'd all have sunburns. (Okay, I know I'm being sarcastic.)

Recent news reveals the Antarctic ice shelf is thicker than ever. The southern hemisphere is experiencing cooling and the temps in the northern hemisphere have leveled off. What is going on? An interesting fact, but one rarely mentioned, is the fact the earth wobbles slightly during its orbit around the sun. Climate change occurred in the past and it is likely due to sun activity and slight shifts in the positioning of the hemispheres due to the wobble. Human activity may contribute slightly to climate change, but the eruption of one volcano contributes more particulates into the atmosphere in a few seconds than all human activity in a year. If carbon dioxide is the culprit, you would expect trees and vegetation to grow at an accelerated rate since plants absorb CO2 and give off O2.

The experts point to the computer models to support their claims, but the fact remains "garbage in, garbage out." You get from the computer only what you program it to provide.

I'm sure my friends tied to research dollars will laugh at me, and I may be wrong in some of my musing, but overall I'd say, "Posh!"
Posted by Michael Hines at 10:30 AM