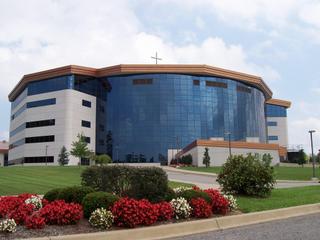 In light of a few things I've written on our mega-churches, I don't want anyone to get the wrong idea. I have a love/concern attitude toward mega-churches. Over my nearly 43 years in ministry, I've served in churches of all sizes. My first ministry was in Laurens, IA, a congregation of about 30-35 at the time. I was also on staff at First Christian Church in Canton, OH. Canton was one of our first mega-churches with Bible School attendances exceeding 4,000 at times during the early part of the last century. When I left in 2004, it had once again attained the status of a mega-church. I am not opposed to growing churches, therefore I am not opposed to Church Growth or even the Church Growth Movement. In fact, there are some positives I love about large dynamic churches. At the same time, there are accompanying concerns that trouble me at times.

1. Large churches are biblical. You can't escape the fact that large growing churches are Scriptural. The first church started as a mega-church with over 3,000 baptized in one day (see Acts 2). From that exciting beginning, the church grew to 4,000 then 5,000 and then it exploded with growth. Man, you would have pruny hands just keeping up with the baptisms!

2. Large churches are exciting. I found it exhilarating to watch as 1,800 to 2,000 people came for worship during my last years in Canton. The singing was wonderful (when the song was singable). The response was terrific. The people walking down the aisle each week made my heart beat just a little faster and, on occasion, tears welled up in my eyes. Yes, we got excited about the numbers but it was because each number represented a person -- a person who needed Jesus!

3. Large churches are influential. I could preach about the sins of the flesh until the cows came home in Laurens or Anita or even in Great Bend and I'd be "preaching to the choir." When a preacher in a mega-church preaches about a sin, social or otherwise, he has influence. It doesn't even have to be a sermon. Joe Wright used a prayer comprised of statements Bob Russell made at the Kansas legislature a few years ago. That prayer raised eyebrows and created controversy throughout Kansas. It probably had negative influence on some but positive influence on many more. I preached in Kansas for eight years but was never invited to pray at the opening of the legislature. Because Joe Wright preached for a mega-church, he received the invitation and made a mark. In addition, when 2,000 or more individuals, influenced by their church, go to the polls or make a stand in their community they have clout.

4. Large churches have resources others don't have. Our budget in Canton in 2004 was, if memory serves, about $1.2 million dollars. In addition, the people committed themselves to raising $5.1 million over a three year period to pay off land for relocation. As Minister of Adult Education, I had an annual budget of more than $25,000 to administer. More than $100,000 went to missions each year. Our budget here in Sun City is a healthy $270,000 and we give 20% to missions all of which is commendable. The talent pool is greater in large churches, too. By percentage, a large church may have no more gifted people than a small church but you can only have so much special music, or youth coaches, or teachers and while you may exhaust your talent pool in a small church, you won't in a large one. (Getting folks to use their talent is equally difficult in large and small churches, however.)

5. Large churches can provide superior programming. While in Canton, my Adult Education Ministry spent more than $12,000 on one program. We invited Dr. Tom Sharp from the Creation Truth Foundation to bring his exhibit to the church and we had a week-long program marketed well in the community through radio spots, billboards, fliers, and so on. More than 1,000 children from Christian schools and home-schoolers showed up for one presentation and evening services ran as high as 700. Most smaller churches would consider the cost of bringing CTF to their church daunting at $5,000. Large churches can provide counseling ministries, special needs ministries, addiction recovery groups, and more.

6. Large churches can be strategic. All too often smaller churches avoid change because of the fear of "rocking the boat." If a large church chooses to make strategic changes and those changes create "upset," some can leave without creating much of a stir. In other words, a large church can afford to "leave the back door open." Smaller congregations often avoid making strategic changes because of the fear that highly influential members or significant contributors will become dissatisfied and leave. No one wants people to leave a church, but in some cases a few healthy subtractions can be as healthy as many additions.

7. Large churches are generally friendly. While there are exceptions, when you attend a large church you are welcomed like a long lost brother. Oh, by the way, the exceptions won't be large very long! When I visited Saddleback I received a warm welcome by the parking attendant who directed me to a parking place, another as I climbed the stairs toward the worship center, another along the way as I was offered a cup of coffee, another at the door of the worship center. Believe it or not, there were other undesignated people who made me feel welcome too. I found the same to be true at North Coast Church, Southeast Christian Church, The Vineyard in Cincinnati, and other assorted churches along the way.

I could probably think of many other reasons for admiring large churches, but seven seemed like a good number.

1. Large churches are tempted to make "the show" the thing. Can it always be said that a worship service must be a major production of Hollywood quality? I attended workshops at the Ginghamsburg Church, a Methodist mega-church near Dayton, where they gave us insight into worship planning. It came across as a production meeting for a live TV show, which, for all intents and purposes, it was. As a result, what should be a participatory experience of worship becomes a show. I keep thinking about all those passages in the prophets where God lets Israel know he despises their shows (sacrifices and feast days) because their heart really isn't right.

2. Large churches are tempted to "compromise" for the sake of numbers. Whether or not some of our mega-churches have abandoned the Restoration Movement's strong stand on biblical authority, there is a tendency to "soften" the rhetoric. Now that's not all bad, but when the motive for softening the rhetoric is to avoid offense doesn't it become an effort to merely "tickle ears"? Then there is the motive that undergirds the effort. All too often "we want to sound like everyone else" so others will think "we're like everyone else." Israel got in trouble with that when they wanted a king like everyone else. You see, if we sound like evangelicals or good Baptists, the evangelicals and the Baptists will stop accusing us of being a cult or being something really wierd like "water regenerationists." Then everyone will "like us" and more will come to our services.

3. Large churches confuse relationship with discipleship. Sunday School or Bible School is passe at least for adults. The important thing is establishing relationships. The theory is that those who make friends (relationships) stay. Its more than a theory, it is a truth and every church needs to develop means by which its members can develop relationships. But let's be honest about it. The main concern here is "shutting the back door" and retaining members so the numbers look good. Christian formation is a secondary concern. So the mega-churches downplay Sunday School -- after all, building facilities for adult classes is expensive -- and emphasize Small Groups. I am uncategorically for small groups, but small groups are for relationship building and accountability. They do not and cannot teach biblical content nor do they effectively stimulate genuine discipleship. Discipleship has to do with "forming Christ in me." Somehow the early church passed on content as well as developed biblical relationships. How did they do it? The model is found in 2 Timothy 2:2. Somebody qualified taught others. Church leaders and teachers responsibly passed on correct doctrine. Part of that doctrinal teaching had to do with "loving one another as I [Christ] have loved you."

4. Large churches are vision oriented rather than people-oriented. In many, but not all, cases the vision boils down to the ABCs of church life -- Attendance, Buildings, and Cash. The church becomes a corporate structure with directors (elders) and officers (the staff) and a CEO (the senior minister). The vision shapes the programs and the success of the program is measured in Attendance, Buildings, and Cash. The few whose lives really do change become "poster boys or girls" for what the program can do, but the real success is measured by "the many" rather than "the few." What ever happened to the New Testament picture of an elder as a shepherd? The word poimene, or pastor, is a word applied to the elder rather than the preacher (unless, of course he is also an elder). It is time for the church to get back to the biblical picture of an elder as shepherd and care-giver rather than executive. The same goes for the preacher and his staff!

5. Large churches often assimilate their culture rather than affect the culture. Although the early church always faced cultural challenges from without, the wide-spread acceptance of Christianity exacerbated the problems. When thousands poured into the church after Constantine, they brought with them many of their heathen practices and ideas. In many cases, the church merely "baptized" those practices and made them somewhat Christian. Since those days, the church has continued to assimilate the culture. According to Wolfe's The Transformation of the American Church, today's church has become so encrusted with the culture it is hardly different. Barna reports that moral conditions within and without the church are roughly equivalent. Somehow the church has forgotten its calling to be "a peculiar people." We use the culture's music, the culture's methods, and the culture's values to market our product but the product is often confused with that offered by today's cultural gurus.

6. Large churches equate "feeling" with commitment. One of the staff members from Southeast Christian Church told me that when they got into their most recent structure, there was an attendance jump of about 3,000 a Sunday. Those making decisions streamed down the aisle in record numbers leaving those responsible for assimilation feel overwhelmed. When asked why they had responded to the invitation, many of those who came said "they wanted to be part of an exciting church." "Just once," I was told, "I would lie to hear someone say they came forward because they wanted to make Jesus Lord." In my view, that's quite an indictment. You see, the feeling of excitement and the dynamics of a service motivated decision rather than commitment to Christ. We are often told that today's people want to feel God or experience God in their worship. These statements represent an emphasis on feeling rather than commitment. You see, one can go home feeling good, feeling excited, and feeling motivated but when the feelings die then .... You see, there is little genuine contentment in a feeling. In my view, real commitment means accepting a truth and when that truth is accepted and lived out then things feel right!

Well, there you have it. Seven positives and seven concerns. Sounds almost biblical!
Posted by Michael Hines at 9:43 AM 13 comments: