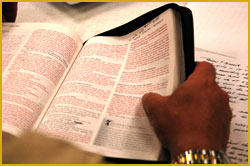 A tremendous amount of ink is currently applied to what is called "restoring the ancient practices." Authors from the "emerging church" carefully point out that today's younger generations seek spirituality and wisdom from ancient practices.

Robert Webber's book, Ancient-Future Evangelism, points the reader to ancient church practices dating back to the second century. Leonard Sweet writes that the younger generation is returning to the music, the stained glass, and the worship styles of the ancient church (with all the technological benefits of today thrown in, of course). Sweet says that to connect with the emerging younger generations (younger Gen-Xers and Millennials), worship must be EPIC. By EPIC, he means experiential, participatory, image-driven, and communal. In this summer's Leadership magazine, Eric Reed discusses the current trend of emphasizing the ancient spiritual discipline practices one might find in many monasteries. Dallas Willard also emphasizes deepening one's spiritual walk with the spiritual disciplines found in ancient Christianity. Terry Mattingly, who was, at least in part, educated at Lincoln Christian College writes weekly columns for Scripps Howard, left the Restoration Movement for Greek Orthodoxy and, at last report, worships in an Anglican Church. Orthodoxy, Catholicism, and even some forms of Anglicanism are seen as offering "ancient" forms for worship and spiritual development. I recently worshiped with a congregation emphasizing "ancient" practices, or at least one man's idea of ancient practices based on ancient Scriptures. (It is amazing how contemporary this worship was.)

As I look at all this stuff about ancient Christianity, one thought keeps recurring: They're not going back far enough!

In his book, Robert Webber takes the reader back only as far as the second and third centuries. It was amazing that during this summer's North American Christian Convention Conferences, Webber spoke at length on Acts 2. He didn't even neglect Acts 2:38 -- at least not completely! It was, however, his only attempt to journey into the first century.

The gurus of spiritual formation travel back in time only to the desert fathers of the second century. Eric Reed, in his Leadership article entitled "New Journeys on Well-Worn Paths," says many Protestants thought Richard Foster "practically invented the [spiritual] disciplines until his exhortations to solitude, fasting, contemplation, and the like fueled the study of the Desert Fathers, ascetics and monastics."

Reed points out that many Protestants are realizing that the church didn't spring into existence in 1517 or 1535, depending on whether you look to Luther, Zwingli, or Calvin. Hundreds of years of devoted followers preceded the Reformation. We've been schooled to think of pre-Reformation Christianity as superstitious, works-oriented, and corrupt. Historians have, in recent years, taken a new look at what was previously called "the Dark Ages" and come to realize that those years weren't all that dark. While rejecting the works-righteousness orientation of those years, Protestants discovered there is much to admire and emulate among those who would seek spiritual formation. After all, salvation does not depend on works but the individual spiritual formation takes effort.

Herein is the rub! The Restoration Movement began in the nineteenth century as an effort to bring about the unity of Christ's church through a return to the ancient order of things. In his series, "A Restoration of the Ancient Order of Things," publishe in The Christian Baptist, Alexander Campbell said his goal was not reformation but restoration. As he put it, you can reform the church and the papal spirit still fill it. You can reform organizations, structures, and methods but you can't reform Christ's church. You can, however, return to the ancient practices -- the first century practices -- of Christ's church.

I still think this is good thinking. Campbell went on to present a series of articles relating to the nature, leadership, practices, and worship in the first century church. Although they are not easily read, every preacher and church leader needs to read those articles. Are they correct in every detail? I don't think so. In fact, I think the series needs updating. Campbell's goal was to speak biblically, act biblically, worship biblically, and follow Christ's example. Doing so, he believed, would reunite "Christianity's warring factions, bring health to the church, and a healthy church would grow and fill the earth.

I'm certainly not opposed to the spiritual disciplines. We need a renewed emphasis on discpleship because genuine discipleship means believing the right things and doing the right things. More importantly, however, we need a renewed commitment to "redig the wells" removing the clutter of the ages and once again on restoring the faith and practice of the ancient church -- the first century church!
Posted by Michael Hines at 9:17 AM 7 comments: