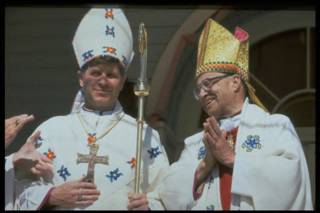 Posted by Michael Hines at 11:53 AM No comments:

Failing to learn the lessons

Americans don't like history. As far as most people are concerned, history is just stories about a bunch of dead guys. It is no wonder we see history repeat itself! When you don't learn lessons from the past, you repeat all the mistakes.

Two churches, or groups of churches, caught a lot of attention over the past few years. One is Perimeter Church. The other is a Christian Church in Naperville, Illinois. Both churches are establishing multiple campuses or congregations under one leadership team. As I understand it, and I could be wrong here, strategy and direction comes from the central leadership team and that team administers one budget for all assemblies. These are not venues, but places where Christians gather to worship. Venues emphasize different styles, the Perimeter and Naperville gatherings may use different styles, but that's not the issue.

When I heard about these churches and their outreach strategy, I thought back over my studies in Church History. When I took "History of the Early Church" with Dr. James B. North, he went to some length to describe the development of the Monarchical Bishop system. He pointed out that in AD 107, Ignatius of Antioch wrote seven letters while traveling to Rome where he faced martyrdom. In several of those letters, Ignatius counseled churches to select one man who would guide the church during difficult times. As congregations grew; it became inconvenient for believers to make their way to a central worship assembly. In addition, few facilities existed that could house such a crowd and building church buildings was out of the question. Therefore, they established satellite congregations around the city which were more convenient. The bishop, from his position in the central church, provided leadership and developed strategy. Each week, he would bless the elements of the Lord's Supper and the an elder (Presbyter) would take it to one of the satellite congregations. If there were an offering taken, the elder would bring the proceeds back to the central church.

The next step occurred when some of the satellite congregations became large enough to establish satellites of their own. By that time, the satellite church recognized one of the elders from the central church as "their presbyter." North maintained that this was the beginning of the Bishop and Priest system in the second century church. The central church recognized the growing satellite church as a semi-separate entity permitting them to select elders. When they established satellites, "their presbyter" became a bishop but remained subservient to the bishop at the central church. When you extrapolate that sort of thing out, you end up with the episcopal system.

I wonder how long it will take Perimeter and Naperville to reinvent the episcopal wheel. Oh, it wouldn't happen in Naperville! It's a Restoration Movement church! Oh, really? How can you be so sure? I thought we in the Restoration Movement believed in locally autonomous congregations. Naperville probably saw their strategy as an excellent expedient, but what happens when that which was adopted as an expedient gets entrenched into tradition? You end up with a new episcopal denomination.

Many of these new innovations really aren't all that new! Furthermore, choices always result in "unintended consequences." I have no doubt that my brethren in Naperville, and others like them, have the best of intentions. I believe, beyond a shadow of a doubt, they are focused on winning people to Christ. But choices always carry consequences -- good or bad! We are accepting strategies, modes of operation, and terms of speech that our Restoration forbears would shudder to hear or see us use. What ever happened to "doing Bible things in Bible ways?" What happened to "Bible names for Bible things?" What ever happened to Alexander Campbell's appear to use "pure speech?"