This summer has been a really busy time with tasks ranging from speaking at Family Camp West at Bison Ranch in the White Mountains to teaching two segments of "Training U" here at Christ's Church of the Valley. In addition to that, we've had several house guests. George Keenan, a new friend who resides in Turkey, stayed with us nearly a week and I got acquainted with him. Earlier, our good friends Bob and Peggy Kuest stayed with us while their adopted son, Scott, had heart surgery. Then we hosted Mark Moore, a professor from Ozark Christian College who participated in our summer "Training U" sequence. Among all that a cousin in Albuquerque came to Phoenix to visit Mayo Clinic and her brother and his family came from Portugal to visit us and do some camping in the "wild wild west." 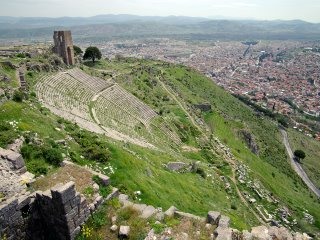 George Keenan's visit multiplied my interest in taking a group to Turkey to visit the sites of the "Seven Churches of Asia" and a variety of Pauline sites as well. George operates Rainbow Tours -- Turkey and offers several economical tours. I'm looking forward to attempting to arrange such a tour in late 2007 or the spring of 2008. As a reader of this blog, if you think you might be interested in such a trip, simply add a comment to this page including your e-mail address.

My current projects include preparing a teaching workbook on Romans for this fall here at CCV. I am also writing the text of the outline I use for teaching "First Things First," my basic doctrines class. Oh, by the way, that outline has been translated into Burmese and as soon as funds are available it will be published for distribution overseas. I also have Part II of a small church history to write. It may be simplistic, but my thesis in this book is that the changes occurring to the church over time are the result of "unintended consequences." By that, I mean that most changes were not made to subvert the church but in response to the need of the moment. There is a lesson to learn from this. It is simply that many responses to need in our present cultural situation also inevitably produce unintended consequences. Those consequences result when the response to a need ends up being calcified and hardened into "the way we've always done it." Then, too, seeing the responses to need in the past some times produces a "sheesh" response in the present. I think primarily of the current trend toward establishing satellite churches. That's exactly what the second and third century church did and it led toward the ecclesiastical structure of the Roman and Greek churches.

Enough is enough for today.
Posted by Michael Hines at 12:55 PM No comments: